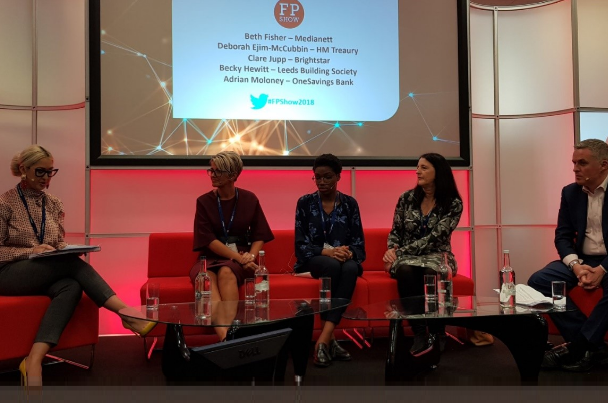 Some businesses are still reluctant to sign up to the Women in Finance Charter due to their focus being on hitting targets, it has been claimed.

The comment was made during a panel discussion at the Finance Professional Show at Olympia London on Wednesday (7th November).

During the discussion, Beth questioned why there had been a lack of businesses signing up to the Women in Finance Charter, despite it being widely publicised.

Clare said: “When my firm spoke to people about their reluctance to become a charter signatory, they put too much focus on meeting or not meeting the targets and the accountability associated with that, rather than [it being] about making the commitment.

“The commitment is the most important thing and that’s what I have been saying [at the FP Show] on the Women in Finance stand.

“It’s not necessarily about smashing the target every single year.

“Once you make that commitment, you’re on the journey.

“You’re on the road to that target.

“And I would like to see more emphasis really from the Treasury on that and saying to people it’s about making the commitment.”

Adrian also agreed that reaching targets was one of the reasons behind the hesitancy to sign up.

He said that businesses may question whether they opt-in for something that they potentially can’t achieve.

“As a bank, we’ve worked really hard to put a lot into the infrastructure to make sure that we get to the targets that we have set for 2020.

“I think, for a lot of firms, it’s: ‘Can we put the effort into that and actually can we achieve it’, rather than not wanting to do it.”

Becky also added that another reason could be on companies feeling that they were supportive of diversity but did not want to separate out gender.

“And my response to that is … we are starting now to see evidence where businesses are focused on gender it’s having a positive impact across the board.”